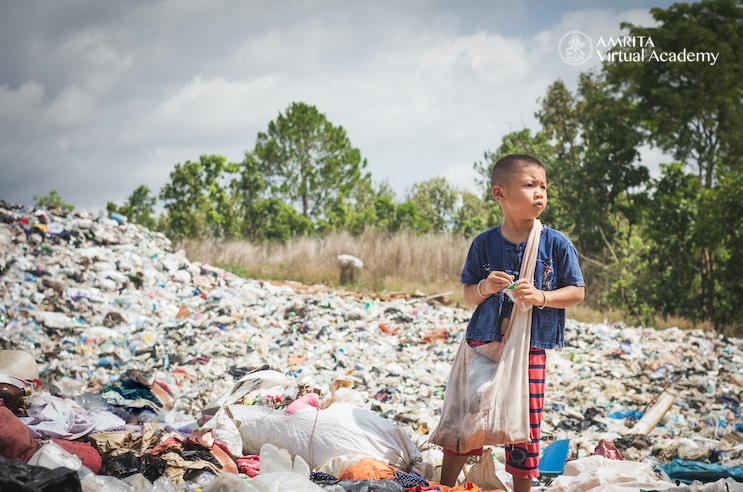 Being involved in civic engagement was NOT my plan. As a matter of fact, I despised anything to do with politics as I had deemed the entire institution corrupt and highly unspiritual.  For decades I sat on the sidelines while indulging my ego in jaded cynicism. The truth is, other than voting in the primary election, I never cared to understand or be involved in the democratic process because I was comfortable.

In March 2017 my blissful ignorance came to an end when China announced new legislation called, ‘National Sword’. I suddenly became aware that we (developed nations) had been shipping our trash and recycling to developing nations and dumping it on their doorstep. I was devastated. Then in April 2017, we moved to the Oregon Coast. As I walked the beaches, I noticed millions of pieces of microplastics in the sand that Mother Ocean had regurgitated. She was literally choking to death on plastic!  The final (single-use plastic) straw came in November 2017 when I went to India for the first time and witnessed the magnitude of the single-use plastic pollution crisis. Unlike the US, India has no way to hide their waste. The truth was out in the open polluting the streets and waterways and destroying nature. My heart was blown wide open and I knew then, my days of sitting on the sidelines waiting for someone else to do something were over. I needed to stand up, be that someone and become civically engaged.

But I was terrified! I was ashamed that at 50 years old, I didn’t know anything about the democratic process! I was afraid my ignorance would be exposed but my love for nature was greater than my fear, so I was willing. Fortunately, I had been a member of the Surfrider Foundation for years and they are experts in advocacy.  I became actively involved and shortly thereafter, was asked to be co-chair on the campaign to ban single-use plastic carry-out bags in my city. I accepted and by default, I was required to interact with and get to know my city council members. In doing so, I realized they weren’t the villains I’d made them out to be. They were people just like you and me! A humbling lesson in contempt prior to investigation.

There were many other spiritual lessons along the way. This process exposed some very deep-seated prejudices and negative tendencies in me that needed to be healed and wouldn’t have been revealed while sitting comfortably on the sidelines. I also gained the kind of ‘Self’-confidence Amma talks about.  The kind where we realize we are not the do-er, that God is actually doing everything through us, so then what is there to be afraid of?

On April 15th, 2019, through Amma’s grace and the effort of many, Ordinance #2148 was passed, banning single-use plastic carry-out bags in Newport, OR. The sweetest part of the victory was knowing I was an instrument in affecting change that would benefit my community and Mother Nature.  Amma says, “Don’t be discouraged by your incapacity to dispel darkness from the world. Light your candle and step forward.” And when we do, She will be with us every step of the way.