My Journey Toward Sustainability

I used to consider myself an avid recycler. I felt a sense of comfort and even superiority on occasion for being such a good steward of the planet. I would go to other places in the US and scoff when I didn’t see the blue recycling bins anywhere. I bristled with antipathy when I saw people throwing their plastic take-out containers in the trash. Didn’t they know how important it was to recycle? This blissful ignorance carried me along for many years. Until November 2017 when I received an alarming letter from my sanitation company.

The letter stated they would no longer take any plastics other than #1 and #2 PET and HDPE, basically bottles and jugs. What? Why? I immediately called my sanitation company to get the scoop. I was told China was no longer buying our plastic and the local recycling facility couldn’t process them. Wait. What? Back-up, you mean our plastic was being sent to China? Yep. And come to find out, this had been going on for years. How could I not have known about this? Although disturbed, I was leaving for Amritapuri in a couple days so this would have to be tabled until I returned. Or so I thought…

My second day at Amritapuri, I wandered over to the seva desk to find out what my assignment would be while I was there. You guessed it…recycling! I laughed at the irony. I showed up the next day and was in for a shock. I was overwhelmed at the amount of plastic being used and cried throughout my entire shift about the magnitude of human consumption. The beautiful thing about Amritapuri however, is they pretty much have recycling down to a science and approximately 98 % of all their waste is recycled. What a great example to the rest of the world!

“You know, you first have to clean up the plastic and garbage in your OWN mind before trying to clean it up in the world.”

After my seva, I just wanted to forget the pain I had experienced during my shift seeing all of the plastic waste. I decided to head into Vallikavu to take a walk around the town and forget about it. As soon as I reached the boat launch by the bridge, my heart sank. There was plastic everywhere in the water! I was completely devastated. Why hadn’t anyone picked it up? Why weren’t there any garbage or recycling bins anywhere? I was shaken but continued over the bridge into town as I pondered on what to do about the mess.

For a moment, I was able to forget about the garbage and lose myself in the magic of India. I could hear chanting from a nearby temple and tropical birds singing blissfully. The spiritual vibration was palpable and I was taken in by the beauty of Amma’s birthplace. Then I turned the corner and what I saw will remain forever imprinted in my mind. Plastic. Everywhere. Thousands of wrappers from western candy manufactures, water bottles, bags and other plastic packaging choking the waterways and littering the streets of this beautiful, sacred land. In that moment, I was overcome with grief and awareness of how our selfish consumption in developed nations was harming other nations and Mother Nature. In the US, it’s easier to turn a blind eye because we throw our evidence in the blue recycling bin and it magically ‘disappears.’ India doesn’t have the same infrastructure so the dirty truth is out in the open and the truth is, most plastics are not recycled. I had read about this in the news but it was something I needed to witness with my own eyes. I started weeping and talking to Amma as if she was in front of me, “Do you see this, Ammé? Why aren’t you doing anything about it? Something has to be done!” But what?

I was very upset and decided to talk to Swamini Krishnamrita about it. I enjoy talking to her because I know she’ll always be honest with me. I went to her office, sat down and started pouring my heart out. I asked if Amma was aware of the plastic problem in Vallikavu? I mean, she doesn’t get out much because she’s always giving darshan! Maybe she didn’t know! I proceeded to tell Swamini how dire the situation was, asking what could ‘we’ do about the world’s plastic problem? She listened patiently until I finished, then flashed me one of her radiant smiles and said, “You know, you first have to clean up the plastic and garbage in your OWN mind before trying to clean it up in the world. After all, the ‘world’ is only a reflection of your mind. That’s where you have to start.” Speechless, I slowly let the truth of her words sink in. The world didn’t need to change, I did.

In December 2017, After three blissful weeks at Amritapuri, I came home determined to look at my relationship to plastic in all aspects of my life. I started looking for ways to reduce my use of single-use plastics. I looked into DIY and zero waste options for many products I normally bought in plastic. I started buying in bulk. I looked for ways to reuse or repurpose things I would normally throw away. I was discovering I could do without many things I thought I needed before. I was slowly trying to ‘be the change.’

I also became actively involved in my community. I set up a small booth at the local farmer’s market to educate people on the recycling crisis and alternatives to single-use plastic. Many people asked how they could help, so Richard and I created a simple website, caringforourplanet.com, to refer them to. Since I live on the Oregon coast, I got involved with the Surfrider Foundation, a grassroots organization dedicated to the protection and enjoyment of the world’s oceans, waves and beaches for all people through a powerful activist network. Thus began my slow journey (at times, kicking and screaming) into civic engagement and activism. In November 2018, I was asked to coordinate the recycling, compost, waste and sustainability for Amma’s North American Tour.

Through all of this, I’ve had to come face to face with my anger and all the garbage lurking in my own mind. I’ve learned cleaning it up on the outside is the easy part, recognizing it and cleaning it up internally is where the real work begins. 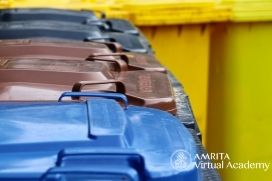 What Happens When It Leaves the Curb?

Ever wondered what happens to your recycling once it leaves the curb? Neither did I until March of 2017 when my waste management facility informed me I could no longer recycle most plastics because China wasn’t taking them anymore. It was a huge wake-up call. I hadn’t been aware my recycling was being sent to China, mainly because I never inquired. As long as it magically went away each week, I felt satisfied I had done my part. Now I know, there is no “away.”

Here’s how it (basically) works: In the US, every city or county has a Waste Management Facility with whom they contract with. These are your ‘haulers’ – the ones who come to the curb, pick up your waste and bring it back to their facility. The garbage is sent to the landfill or incinerator and the recycling is dumped into a big-rig container. Once that container is full, it is driven to the Materials Recovery Facility or ‘MRF’. Pronounced like ‘Smurf’, but with an ‘M’. At the MRF, the recyclables are sorted and the plastics that have a viable market are crushed, baled and most likely shipped overseas. What about the plastics that aren’t viable? No one really knows for sure what is happening to those. I tried calling MRF’s in several cities to ask what their end-markets were. None of them would answer my questions, saying the information was “proprietary.” All I wanted was the truth, but the truth isn’t always convenient.

The truth is, only 9% of all plastics ever created have been recycled. Since 1950, we have created 9.2 billion tons of plastic. Of that, more than 6.9 billion tons have become waste. And of that waste, a staggering 6.3 billion tons never made it to a recycling bin, so now we are drowning in it. The great thing about plastic is it’s so durable. The problem is, it’s so durable it doesn’t decompose. It only breaks down into smaller and smaller pieces which we call microplastics. These microplastics can now be found on every beach, in every bucket of water scooped from any ocean, in our sea salt, fish, marine animals, atmosphere, water supply, and in us. It has never been more critical that we heed Amma’s warnings to reduce our consumption of single-use plastics and care for and protect Mother Nature.

What we know today, is there is a still a viable end-market for plastic resins #1 and #2 PET and HDPE – mainly bottles and jugs. They are higher quality and can be more easily recycled or downcycled in actuality. This makes them more profitable and therefore, more desirable. The other types of plastics (#3 – #7) are not easy to recycle or cannot be recycled because they are made from low-quality polymers or have already been downcycled several times. Not to mention most facilities in the United States are not equipped to process them. Additionally, the current low cost of oil per barrel makes it cheaper for manufacturers to use new, virgin plastic than to sort, clean, melt and recycle lower-quality, contaminated plastics. So, what happens to these undesirable plastics?

Well, depending on where you live, the majority are either being landfilled or shipped to end-markets in third-world countries such as Philippines, Cambodia, Ecuador, Vietnam, Turkey, Ghana, Thailand, Bangladesh, Senegal, etc. Right now, alarm bells should be going off. Yes – we are sending our garbage plastics to other countries that can’t even process their own. These developing nations’ are shouldering the burden of developed nations’ over-consumption. So, what are they doing with all of this plastic waste? Good question.

Some of the more viable plastics are melted down and made into “nurdles.” Nurdles are tiny plastic pellets, the size of a lentil or smaller, that serve as the raw material for most plastic products. Due to mishandling and industrial spillage, these pellets are a major source of plastic pollution in their own right. The less viable plastics are piled up in open dump sites, incinerated or processed in recycling facilities, many of which are operating illegally without any regard for the environment or the safety, health and well-being of the people working there.

One of the most important things to realize is when we collect and remanufacture plastic, we are only delaying its disposal as it can only be downcycled so many times. The final destination for all plastic is either a landfill, where it doesn’t decompose, or an incinerator, where it releases harmful chemicals when burned, or the environment in some form of pollution.

So, is there any good news? Well…Yes! YOU are! You CAN make a difference! At the end of Amma’s 2019 New Year’s Message, one of the questions she posed to each of us was, “Am I able to contribute and play my part in protecting the environment?” We can all contribute and play our part if we:

· REFUSE – what we don’t need. Manufacturers’ will stop making when we stop buying.
· REDUCE – single-use and unsustainable items.
· REUSE or REPURPOSE – what we already have.
· REPAIR – rather than throw away, there is no away.
· RECYCLE – what we can.
· RALLY – your elected officials to pass legislation on single-use plastics.

And remember, no action toward the care, protection and conservation of nature is ever too small or insignificant. Our every action matters to something or someone, somewhere.